LSG posting memo of our division... 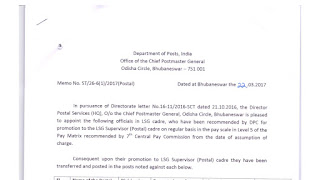 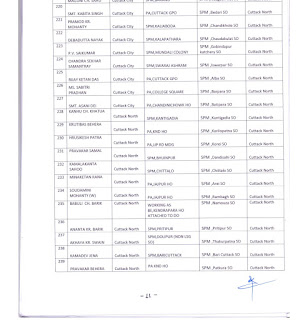 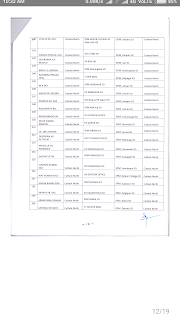 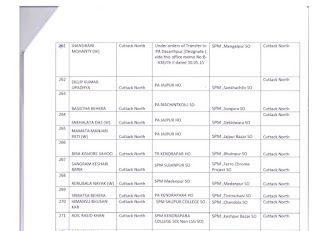 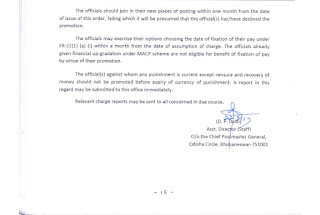 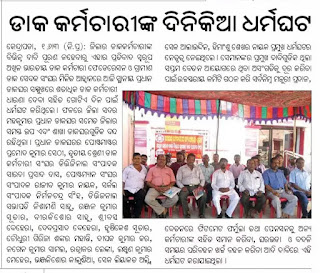 All the media of Kendrapara edition highlights about the grand success of our Division participation in respect of one-day strike on 16-03-2017.Hence our divisional union thanks and congrats to all comrades for making the one day strike a historical success.. 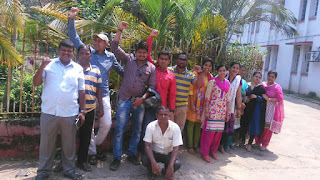 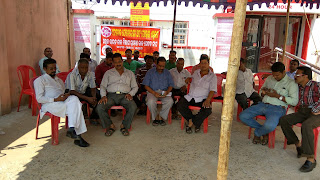 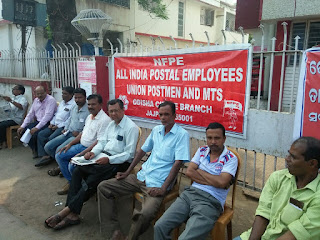 All the members of our division participated in toto..
Posted by Amulya at 11:14:00 AM No comments: 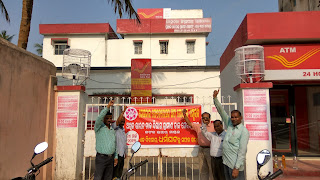 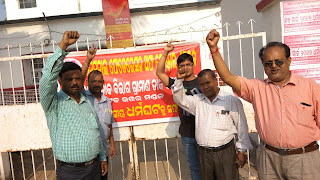 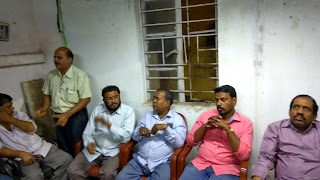 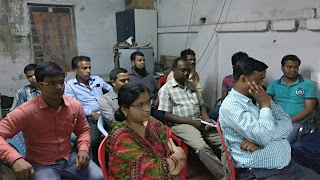 One preparation commitee meeting held at Kendrapara HO on 14-03-2017 and at Jajpur HO on 15-03-2017.Circle secretaries and division Secretarries addressed the meeting and appeal all the members to success one day strike on 16-03-2017. 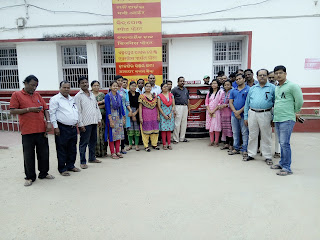 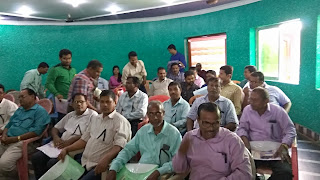 As per Confederation decision BLACK DAY on 06.03.2017 has been obserbed against the betrayal of Central Government Employees by group of Ministers of NDA Government and demanding increase in minimum pay and fitment formula. All members of aur division observed the same.. 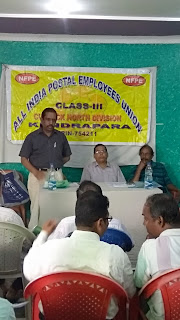 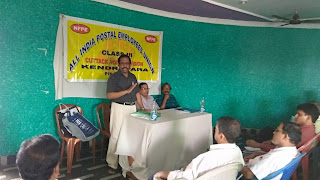 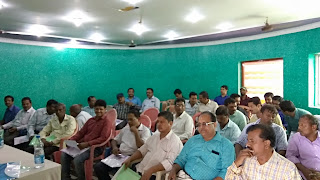 General body meeting of our Union held on 05.03.2017 at Golden Palace,Kendrapara.All members has been well attended. Decision has been taken to success one day strike on 16.03 2017 in toto.Besides that the effect of cadre restructuring, IPPB and CSI has been to discuss..
Shri Sarada prasad Das
Divisional Secretary
Cuttack North Division

Para 'F' of the Postal directorate cadre restructure order insists that "The vacancies arising out of the restructuring will be filled up only from the amongst the official who fulfill the eligibility criteria  laid down in the recruitment rules  for the post."
So, to fill-up in the newly identified posts, they have to fulfill all the eligibility service conditions, laid down in the recruitment rules.
For example
For newly identified LSG posts: 5 years of PA service should be completed.
For newly identified HSG-II posts: 6 years of LSG service should be completed.
For newly identified HSG-I posts: 5 years of HSG-II service should be completed.
So initially PAs will be called willingness to post at LSG posts as per the circle gradation lists and initially LSG posts only will be filled. Most of the newly identified HSG II/HSG I posts will be vacant only even after implementing this cadre restructure at various circles if eligibility service conditions are not relaxed by the postal directorate.
Myth 2:
Could we decline the LSG promotion, while we sought the willingness by circulating the PA circle gradation list?
Fact:
YES. Employees can decline the promotions offered by cadre restructure. But if the employees declined the promotions, then they will not get any further financial benefits under MACP scheme till getting the promotions.
However there would be no loss if the MACP III officials are declined the promotion since they have already obtained the maximum financial upgradation as per the present MACP norms.
Myth 3:
Will it be any dislocation from the working office because of the cadre restructure? Will they be posted beyond their working divisions?
Fact :
May be. Those who are accepting the LSG promotions fresh, by the virtue of cadre restructure, then they may or may not be posted within their working division. It is pertinent to mention here that LSG/HSG II/HSG I cadres are circle cadres. However all the possible opportunities will be given to accommodate them within their working division.
Those who are working already in the newly identified LSG posts as PA, they may also be disturbed and posted some other offices. For example now treasurer posts are identified as LSG posts. So the officials working in treasurer post as PA will be disturbed and posted at some other places.
Myth 4:
What would be the financial benefits after cadre restructure?
Fact:
Literally No financial benefit from the cadre restructure to the Group -C employees.
There are ample number of MACP employees available who already got Rs.4600/Rs.4200  grade pay. They will be filled after following due LSG/HSG recruitment rules procedures.
In future also, though service conditions are relaxed to fill-up the remaining HSG-II/HSG I posts, there would NOT be a financial benefit, if MACP 2 and 3 officials are filled up in the newly identified posts.
Myth 5:
Should RT be completed first or cadre restructure?
Fact:
It is advisable to complete the cadre restructure first.
B class/C class SPM posts may be in the purview of RT. Before cadre restructure those posts are PA cadre. If RT is completed first and those were filled by the PA cadre from the RT due officials, then after cadre restructure those B/C class posts are identified for LSG cadre. So those posts should only be filled up by the LSG officials as per the PA Circle gradation list. So if RT completed first by the PA cadre, then immediate disturbance will arise.
Myth 6:
What is the benefit of Cadre restructure?
Fact :
Till then Group C employees can get only 3 financial upgradations under MACP. They can get the grade pay upto Rs.4600/-. But now the virtue of cadre restructure, new HSG-I(NFG) posts are created for those completed 2 years service in HSG-I cadre. So Group-C employees can reach the Grade pay level Rs.4800 in future.
Myth 7:
After Cadre restructure newly identified LSG officials will do only supervisory work.
Fact:
NO. If they are posted at Treasurer posts (now identified as LSG) they have to do treasurer work. If that treasurer post is allotted with some other branches on interest of service then they have to do look after those branches also.If LSG promoted officials are posted at B/C class SPM posts then they have to do all the operative and supervisory work already allotted to that SPM posts as per the MDW.
Myth 8.
Cadre restructure is only to Group C employees of postal wing. What about other cadres like Postmaster / RMS/ SBCO
Fact:
NO. After implementing the cadre restructure at Group C cadre of Postal wing, Postmaster Cadre, RMS and SBCO wing cadre restructure will be done one by one as per the bilateral agreement between staff side and department.
Posted by Amulya at 5:17:00 PM No comments: