Declaration of Bhubaneswar and Imphal airports as international airports

The Union Cabinet today gave its approval for declaring the Bhubaneswar and Imphal airports as international airports to fulfill the long pending demand of people as well as the State Governments of Odisha and Manipur.

Declaration of these airports as international airports will offer improved connectivity, wider choice of services at competitive cost to the air travelers resulting in boosting international tourism and economic development of the region and the country.

Biju Patnaik Airport or Bhubaneswar Airport belongs to Airport Authority of India and is suitable for operation of Code `D` aircraft of type B-767-400. The airport is also equipped with facilities for night operations, runway 14/32 of dimension 2743m X 45m, apron to park six aircrafts and navigational aids. A new domestic terminal building with all modern amenities for handling 400 arriving and 400 departing passengers has been constructed and inaugurated in March 2013. The modification/renovation of the existing domestic terminal building into international terminal building with an area of 6264 sqm. suitable for handling international operations has been completed. Six check-in-counters, custom counters and immigration counters are being provided and the requisite facilities of customs, immigration, health services and animal and plant quarantine at the airport have also completed.

Imphal Airport belongs to Airports Authority of India and is suitable for `C` type (A-320/321) of aircrafts operations in all weather conditions. Major facilities including night operations, runway of dimension 2746m X 45m, Apron to park 3 nos. A-320 and 1 No. ATR-72 at a time, terminal building having an area of 6592 sqm. modified to integrated terminal building, navigational aids, nineteen check-in-counters, custom counters, immigration and sufficient space for health services and animal and plant quarantine are being provided at the airport.
Posted by Amulya at 6:54:00 AM 1 comment:

The Government of India had convened a meeting of the staff side representatives on 24.10.2013 to discuss the terms of reference. The meeting took place at 3.00 PM on 24th under the chairmanship of Secretary, Personnel. Besides the points mentioned above the staffs raised many other matters connected with the setting up the CPC. viz the inclusionof labour Representative as  a member of the commission; the anamalous situation brought about by the Grade pay based MACP scheme; the requirement of a mechanism to settle the 6th CPC related anomalies; the need to allow the proposals of Cadre review to be examined by the Government independently without referring it to CPC; to have membersin the Commission who have gained expertise to impart to the Commission the nuances and functional requirements of various Departments; to relook at the new Pay Structure brought in by the 6th CPC in the light of the experience between 2008 to 2013 etc.

People should take full benefit out of the welfare schemes of the government, Shri G.K. Vasan, Union Minister of Shipping, urged the people. The Minister was addressing after inaugurating the three-day-long Bharat Nirman Public Information Campaign at Medavakkam near Chennai today, organised by PIB. People should visit such awareness campaigns and know about all the welfare schemes and the ways & means to get full benefits, Shri Vasan asked the gathering. In this direction, the Minister commended the Public Information Campaigns that have been organized for the past seven years with the aim of enlightening the people about the various welfare/developmental schemes. For the benefits of the schemes to reach the common people, every one, right from Ministers to Panchayat leaders and the common people, should be involved, he noted. The exhibition that had been put up on the sidelines of the Campaign with more than 40 stalls highlights the priority schemes of the government. People should visit each and every stall, ask questions, and know about the schemes thoroughly. The UPA government at the Centre has been implementing various welfare schemes for the common people for the past nine years, for both rural and urban people, Shri Vasan pointed out. The Bharat Nirman schemes are implemented under the direct supervision of the Prime Minister. These schemes provide all the basic facilities in the rural areas, like drinking water, irrigation, electricity, telecommunication, medical, housing, etc. The government wants the rural areas to have same basic facilities like in cities, he added. Some of the priority schemes of the government are Right to Information, PM`s 15-point programme for the welfare of the minorities, Jawaharlal Nehru New Urban Renewal Mission, etc., the Minister highlighted. Shri Vasan noted with pride the implementation of MGNREA out of which 4.8 crore families are benefited. Since 2006 till 2013, Rs. 2, 38,400 cr. has been spent on the programme. He pointed out that the mid-day meal scheme, the world`s biggest such scheme, was thought of and implemented some 60 years back itself by the visionary leader, Shri K. Kamaraj, who also introduced the uniform system for students so that there will not be any social differences among the students while studying. This mid-day meal scheme has now been implemented throughout India by the UPA government. During 2013-14, Rs. 13,215 cr. has been allocated for this, out of which 12.5 crore students are benefited. Another important scheme is Food Security Scheme, which benefits 63% of rural population and 37% of urban population. Rs. 1, 27,000 cr. is the fund allocated for this, Shri Vasan said. For education, Rs.27, 258 Crore has been allocated to ensure education for all, which has benefited 20 Crore students and drastically reduced non-school going number. Similarly for the welfare of SC/ST, Rs. 66,158 crore has been allocated, which is 12% more than last years. For minorities, the fund allocated is Rs. 3,514 crore, which is again 14% more. The government is also focusing on the welfare on women & children, for which Rs. 1, 74,370 cr. has been allotted, The opening of all-women bank is a step in this direction, Shri Vasan pointed out. Shri Vasan noted that such campaigns are conducted for creating awareness about the schemes for which huge sums are allocated by the government. So people should fully utilise such opportunities and know about the schemes to reap full benefits out of the schemes. Later, Shri Vasan observed that all the sections of the society, cutting across narrow political interests, must join the efforts of the government in implementing welfare schemes. The Minister also released 12 booklets brought out by PIB on the welfare schemes. He also handed over loan benefits to various groups/students, organised by Indian Bank. Earlier, Shri K.M. Ravindran, Addl. Director General, PIB, Chennai, welcomed the gathering. Thousands of people from various sections of the society, including Women SHG members, students, etc., participated in the event.

As the cost of raw material, Whole Price Index, cost of services etc., have increased manifold since last decade, the Indian Railways has introduced revised menu and tariff for Rajdhani, Shatabdi and Duronto trains with effect for 17th October 2013. A new concept of Combo Meal was also introduced as an every alternate meal on long distance Rajdhani/Duronto trains which was priced at half the cost of the regular Lunch/Dinner so as to reduce wastage/excess items. However, due to some feedback that these changes were not appreciated by some sections of travelling passengers, senior officers were deputed in all such trains for on the spot study. Based on the feedback received from passengers, regular Meal, in place of Combo Meal has been restored now. Quantities reduced in certain dishes have also been restored. Cyclic Menu has also been introduced to give variety. Railways are making all out efforts to ensure wholesome, quality meal to the travelling passengers. Supervision & monitoring have been strengthened by deploying Railway Personnel’s /Sr. Officers for inspections to check quality & hygiene. Passenger’s feedback will now be a regular exercise. There will be no increase in ticket fare on this account.
The Menu and tariff of Rajdhani/Shatabdi/Duronto trains is included in the ticket fare and had not been revised since 1999. With a view to arrive at the realistic prices as well as redraw the menu more rationally, Committees had been nominated by the Board to recommend the revised rates. The committees have scientifically examined all aspects of costing keeping the objectives to provide hygiene and affordable meals with varieties to the travelling passengers on the premium trains. Based on the reports of the committee, the revised menu & tariff had been introduced from 17.10.2013 hoping to bring positive changes.Further, keeping the objectives to provide hygiene and affordable meals with varieties to the travelling passengers on the premium trains, following major steps have also been taken in this regard: • Stringent quality parameters like supply of branded products in hygienic condition. FPO/AGMARK approved items and compliance of instructions of Food Safety & Standard Authority of India (FSSAI) are to be made mandatory. • Provision for external audit (Third Party Audit) by reputed and independent agency appointed by zonal railways to undertake audit of quality of services periodically to ensure the quality has been made mandatory.
Posted by Amulya at 8:55:00 PM No comments:

Delhi Postal Circle has made special arrangements for acceptance of Diwali Greetings Mail at 34 Post Offices and 2 RMS Offices at Railway Stations as given below from coming Monday i.e. 28.10.2013 to 06.11.2013.  Separate reception counters are being set up at these Post Offices.  Members of public are Welcome to post their Diwali Greetings mail at these collection centers.  These centers are made available in addition to the normal facilities provided: 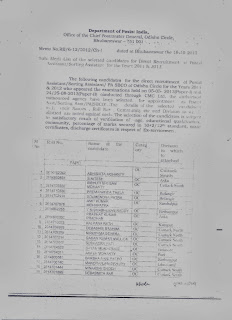 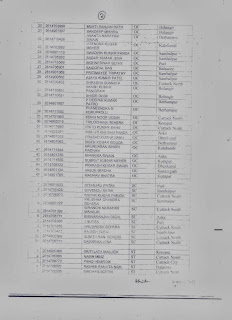 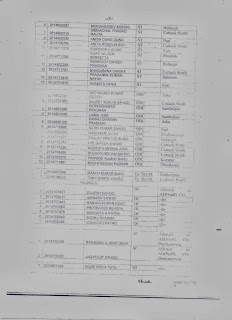 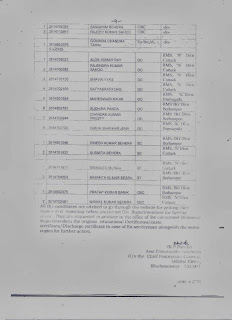